Ontario Ranks First in Canada for Women's Representation... but Canada now has just one female Premier

Ontario Ranks First in Canada for Women's Representation... but Canada now has just one female Premier

Ottawa, Ontario – In the 2014 Ontario general election, Ontario chose its first woman Premier and the legislature welcomed a new high of 35.5 percent women MPPs to its Legislative Assembly.

With 17 new ridings at play in 2018, the expectation was that the number of women candidates on the ballot for Ontario’s 2018 general election was likely to increase and – by extension – the percentage of female MPPs elected at Queen’s Park.

Both of these things proved true. Ultimately, at the close of nominations for yesterday's Ontario general election, women comprised 228 (44 percent) of the 496 candidates on the ballot for the major four parties.

In fact, the Ontario New Democratic Party and Green Party both nominated more women than men for the first time in Ontario’s history - a major breakthrough: 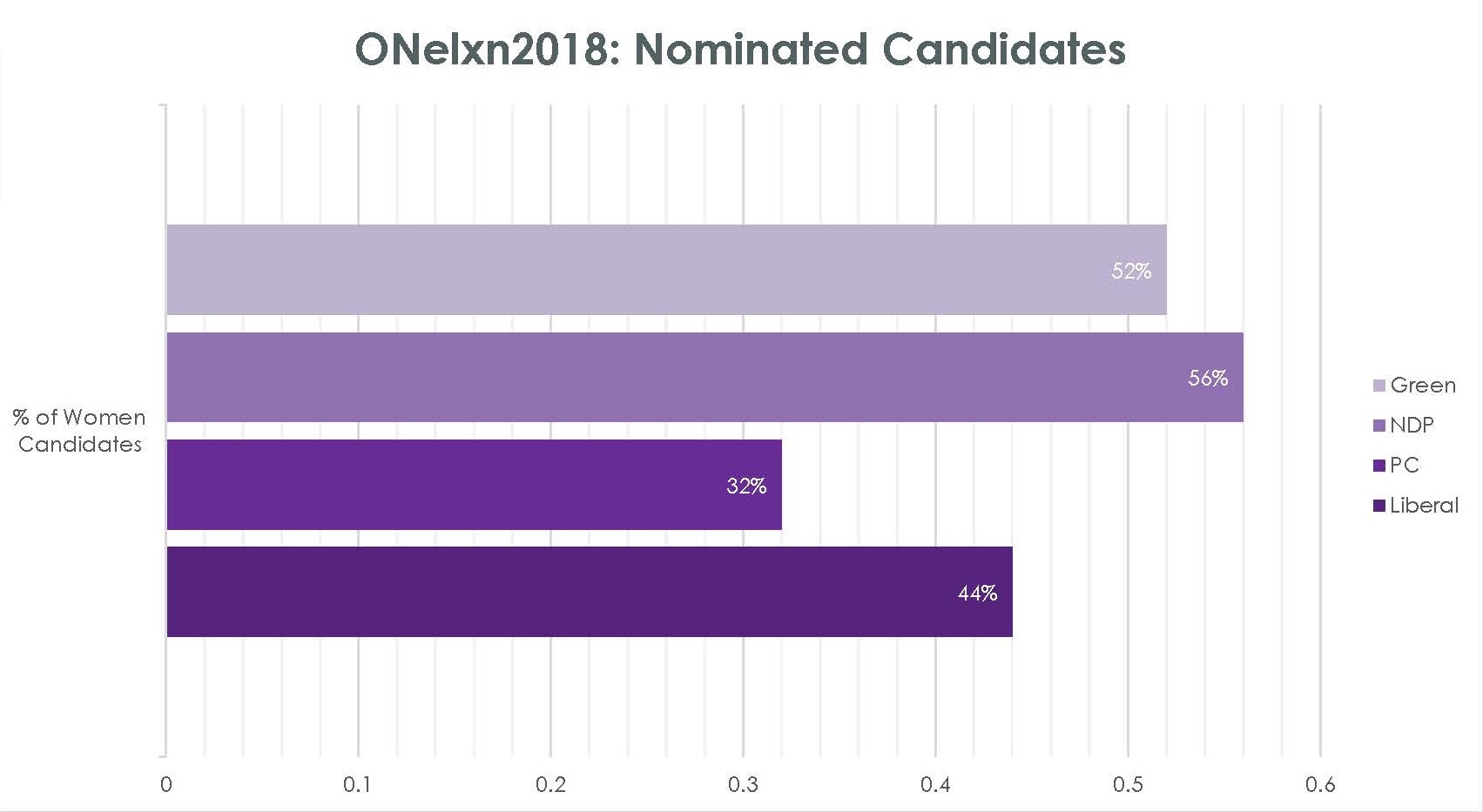 Historically, women candidates have often been nominated in ridings considered less ‘winnable’. With the redrawing of the electoral map in Ontario and a political climate that demonstrated a distinct desire for change, determining how well positioned some of these women candidates were to win or lose was exceedingly difficult.

This said, with 54 of 124 ridings fielding a minimum of two women candidates from the major three parties, the odds appeared favourable to women.

Now that the results are in, Equal Voice is pleased that the 2018 Ontario provincial election saw a discernable increase in the number of women to represent their constituencies at Queen’s Park.

Ontario now ranks first in the country for the proportion of elected women (at 39 percent), just 1 point higher than British Columbia's legislature.

The newly elected Official Opposition, the Ontario New Democratic Party, was successful in electing 20 female MPPs (50% women) to their caucus.

The incoming governing party, the Progressive Conservatives, have elected 24 women - or 31.5% of their caucus.

Of the 7 MPPs elected under the Liberal Party banner, four are women, including outgoing Premier Kathleen Wynne. 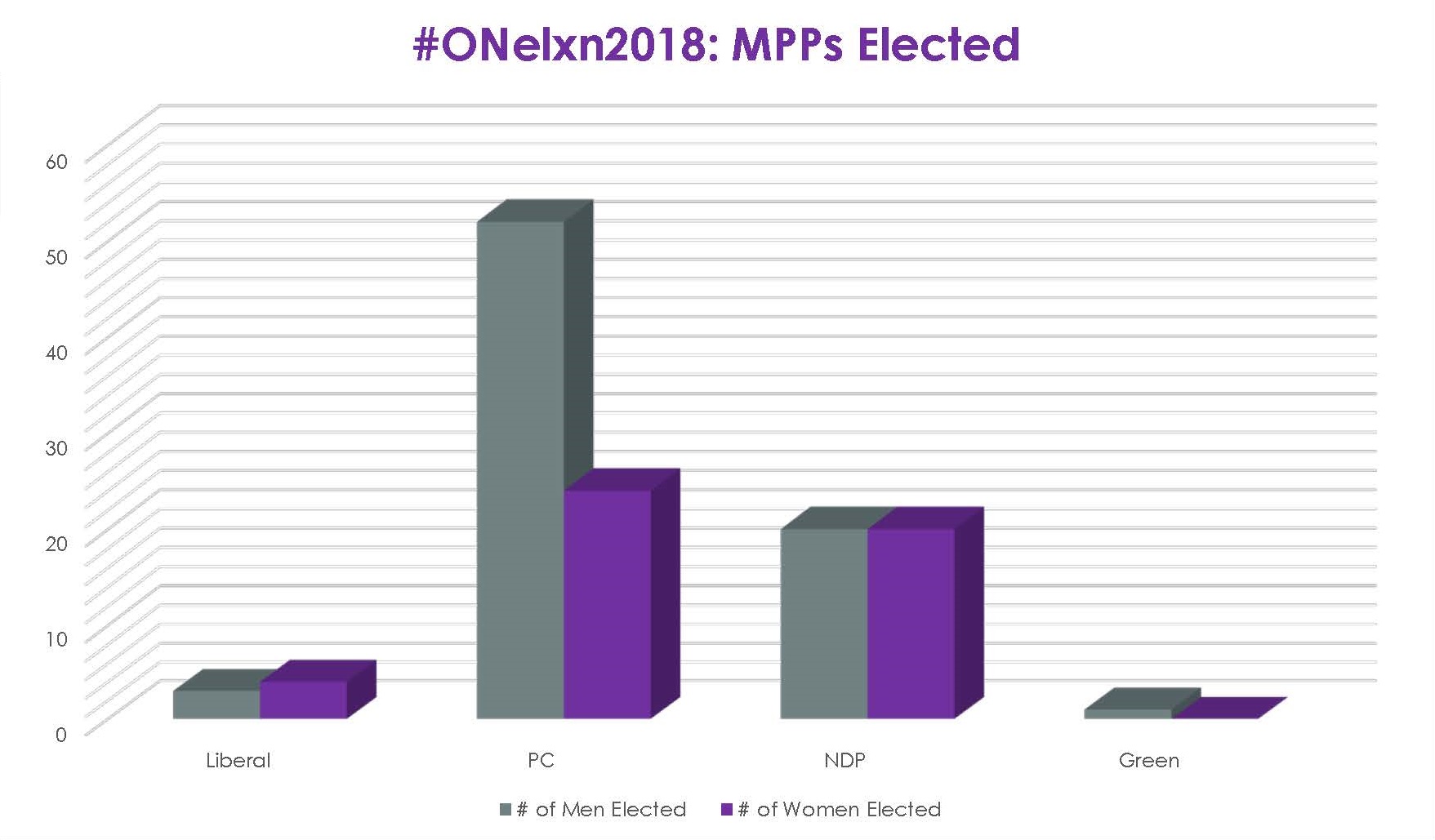 Number of Female Premiers Down to One in Canada

With the defeat of Kathleen Wynne’s government, the only remaining woman in the role of Premier in Canada is Alberta's Rachel Notley. This is the lowest number of women at the provincial or territorial helm since 2009 when Eva Aariak, Premier of Nunavut, served as the lone woman to lead a Canadian province or territory.

Such results demonstrate the need for continued efforts to encourage and equip many more women to seek office at all levels of government.

The significant efforts made by all parties to ensure women are on the ballot in sufficient numbers matters a great deal. At the same time, across the country, what Equal Voice sees, more often than not, is modest incremental change.

While Ontario now occupies the number one spot for its representation of women, the loss of the female Premier of Canada’s largest province is disappointing.

It repeats the all-too-familiar pattern in Canada of women Premiers being unable to secure more than a single term. This is true across parties and across the country where female Premiers have initially succeeded and then faced defeat, or resigned before the end of their mandate.